It came to my attention through an internet article that a perigee moon and full moon would coincide ( “supermoon” ) and be visible on Saturday evening, May 5, 2012.

After some research, it seemed that the moon-rise would be visible on the eastern horizon just after sunset.

To locate just the right setting with suitable foreground objects, I visited the west side of the Newport Beach Back Bay on several evenings prior to the event date to ascertain the moon trajectory during its early ascent from the horizon.  From the Castaways park view, the moon trajectory was to far to the south to be near any foreground objects to give the moon perspective.  From the Galaxy Drive park view, the trajectory was too far to the north.  The final decision was to take the photographs from the rowing shell staging area of the Newport Aquatic Center

Since the moon was moving and the time between exposures was several seconds, the image of the moon had to be repositioned in Photoshop to precisely align with the moon position in the background image. 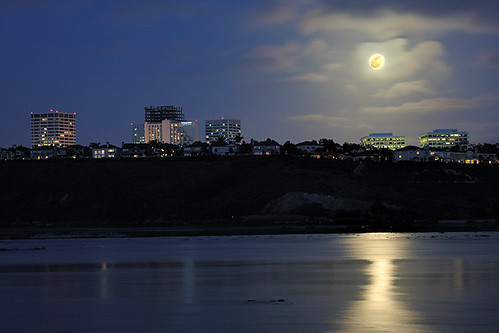 I am open to suggestions for improving the above image.  Please leave your comments below.